Bad Bunny already has performances set for his El Ultimo Tour Del Mundo arena tour for this upcoming February. But he recently revealed additional shows for this year, naming the tour, “Bad Bunny: World’s Hottest Tour.” The announcement was made earlier this week and will be produced by Live Nation and CMN and it will kick off in August. The tickets for the anticipated show go on sale Friday, the 28th of January. When his El Ultimo Tour Del Mundo was announced in 2021, tickets sold out so fast causing the website to crash. Joining Bad Bunny on his U.S. part of the tour are DJ Alesso and Diplo. The show will begin at Camping World Stadium in Orlando on August 5th and will end at SoFi Stadium in Los Angelos on September 30th. 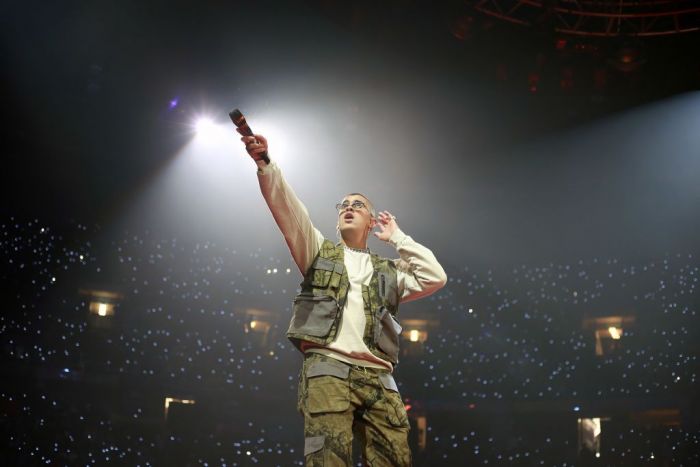 The Puerto Rican reggaeton singer posted a video on Instagram with his girlfriend Gabriela Berlingeri and actor Mario Casas. Bad Bunny says in Spanish, “I was wondering, what if I announce my next tour?” In the caption of the video, he wrote, “now, 2022 has begun.” The artist will also visit Boston, Chicago, New York and will make stops at famous venues like Fenway Park and Yankee Stadium. The Latin American part of the tour will;l begin October 21st in Santo Domingo, Dominican Republic where he will hit Buenos Aires, Argentina, Peru, Panama City, and Mexico City. Bad Bunny’s name has become very well known since his debut album, “X 100pre,” was released in 2018. He released two additional studio albums in 2020, “YHLQMDLG” and “Bad Bunny El Último Tour Del Mundo.”

The 27-year-old rapper is ranked the number 1 Latin artist in the United States by Billboard for three straight years and has the most top 10 hits on the Hot Latin Songs chart. The tour announcement for Live Nation wrote a statement saying, “This announcement is a clear representation of Bad Bunny’s extraordinary growth as a global superstar. There is no doubt that after such success, “Bad Bunny: World’s Hottest Tour” in stadiums with an all new production will continue to elevate the artist’s career to new transcendental levels.” Bad Bunny also took home his very first Grammy Award last year and in sharing his feelings about performing at the AMA’s, he explained, “It was one of the more beautiful moments in my career. The recognition of an album that, for me, is very special, and which I consider one of the best albums in the latest era of reggaeton and the Latin genre.” There’s only going up from here.