How The Pop It! Toy Became An Overnight Sensation
By Claire Miles - October 21, 2021

The Pop It! toy seems to have popped up everywhere, literally. These fidget toys are meant to mimic the sensation of popping bubble wrapping paper and come in many different shapes and sizes, such as strawberry, avocado, and unicorn shapes. Their rise in popularity is due to a mixture of pandemic-related stress and viral TikTok videos. There are even a trending hashtag #fidgettoys which received 12.5 billion views in the month of August. This boom in popularity shocked the makers and sellers of this toy, for they believed this would be a short-lived trend. But it tuned out to be a social media favorite that no one can seem to stop talking about. It’s even grabbed the attention of other toy aficionados. Jamie Glassberg, the co-owner of Top Trendz, a toy company in Ronkonkoma, N.Y. said, “Nothing has ever lasted this long that produces a variety of such poppable fidgets called OMG! Pop Fidgety! “You would think that it would slow down but it’s not at all.” 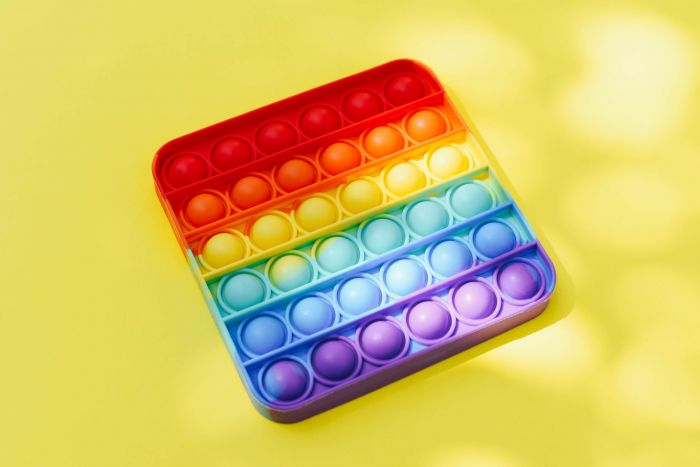 Back in 2017, a similar stress-relieving toy hit the market, the fidget spinner. Senior buyer of toys and Learning Express Toys and co-owner of a store in Massachusets, Rob Kracinovich said, “The last trend was the spinners. They were spinners and that was it. There wasn’t any TikTok back then.” TikTok has helped accelerate the Pop Its product exponentially. The original creator of Pop Its, FoxMind explained that the idea for the toy came to him in a dream where players popped one after the other until every bubble was popped, and the rest is history. In 2019, it sold 700,000 units. Fast forward to 2020 and 2021, and the company sold over 7 million units in North America alone. The toy became popular not just among children, but adults as well. Mark Thoma, the vice president of design and marketing at Buffalo Games said, “It is rare for something to work across all demographics.” Yet, this toy seems to be doing just that.

It is such a simple toy but has maintained the interest of children at the same time. How is that possible? Chris Byrne, The Toy Guy, and an independent toy consultant explained in a statement to InsdieHook, “We’ve got the physical, the mental, the intellectual, and just the plain fun. Also the tactile and sensory. I think that’s one of the things that’s really cool [about the Pop It!]. You know, kids love making things happen, whether it’s bubble wrap or Pop Pops Snotz. [Pop It!] really falls under the banner of very classic play, like a yo-yo or back in the day, a Super Ball. Something that is physical, doesn’t require a great deal of skill but is appealing in its own way.” It makes sense after all that such a toy would skyrocket in popularity during a time of high anxiety due to the pandemic because the Pop It! works as a stress reliever. If you ever come across one of these toys, try it out for yourself.