The Hubble Space Telescope has spotted a strange exoplanet 336 light-years away. The planet, known as HD 106906 b, is 11 times more massive than Jupiter and revolves around two stars at the center of the system. HD 106906 b is about 109 billion kilometers away from these stars – this is 730 times the distance between the Earth and the Sun. Astronomers believe that the exoplanet may help us to understand the hypothetical planet – the phenomenon of planet 9.

Astronomers first discovered HD 106906 b at the Las Campanas Observatory in 2013 using the Magellan Telescope, although the team knew nothing about the planet’s orbit at the time. Here Hubble helped them. This space telescope has been regularly “watching” the exoplanet for years. The team used Hubble archived data to calculate HD 106906 b motion. Astronomers have been amazed by the exoplanet’s extreme orbit – it orbits far away from the dust and debris disk (equivalent to the Kuiper Belt disk in the HD 106906 b system). Moreover, it looks almost like the ninth planet should look like in the opinion of science.

It should be noted that in this case we are talking about a hypothetical planet nine. Available data suggest that there may be a planet 10 times the size of Earth in our solar system, although it is quite far from the center of the system. The most convincing evidence for the existence of the planet is the unusual grouping of objects beyond Neptune in the outer solar system. Scientists think that such a layout of space rocks may be caused by the gravitational field of Planet 9. 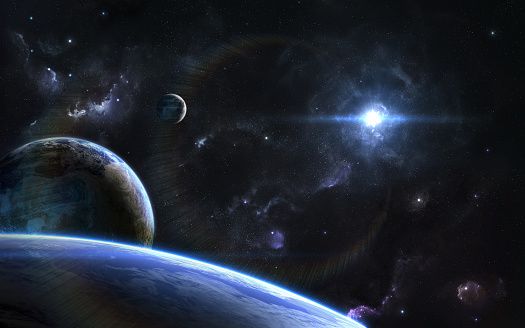 HD 106906 b rotates so far from the binary star that Hubble was able to detect it quite easily (see image above). This allowed the team to better explore the planet’s orbit. Note that one year of Planet HD 106906 b is equal to 15,000 Earth years. The strange thing is that it, unlike the planets in the solar system, has an inclined orbit.

“To better explain why this is weird, compare it to the planets in the solar system – they all move in the same plane here,” said Meiji Nguyen, lead author of the study at the University of California, Berkeley. “It would be strange, for example, for Jupiter’s orbit to be tilted 30 degrees relative to the orbits of other planets. This raises many questions about how it turned out to be so tilted so far from the center of the HD 106906 b system,” he said.

Researchers think that HD 106906 b may have formed quite close to its “native” stars, but over time, instead of the planet colliding with stars, as is usually the case on nearby planets, star gravity has attracted the planet. However, at some point the planet was impacted by another star and caused an elongated orbit to form – the planet’s orbit approaching the stars on one side and moving away from the other.

The HD 106906 system is 15 million years old. With further observations, this planet might help us figure out how to look for planet 9. It is now known that the James Webb Space Telescope will fly into space in less than a year. He may also be able to detect smaller exoplanets in the HD 106906 system, which will help astronomers explain the origin of this strange exoplanet.

“Although we have not discovered the planet nine times, we can roughly guess about it depending on how it affects the objects in the outer solar system,” said study co-author Robert de Rosa. “From this we might think that if this planet is indeed responsible for the events that have taken place beyond Neptune, it may also have an inclined orbit with respect to the plane of the solar system,” he added.