When it comes to fashion Kim Kardashian has really made a name for herself. So much so that many actually consider her to be a fashion icon. Kim has always made bold and unique fashion choices which she struts in public and on her social media platforms. Due to Kim becoming and being such a major fashion influencer, she has been known to wear some of the most exclusive high-end fashion looks. With that said, she has also been able to collaborate with a number of high-end fashion brands and labels. Kim did just that during this year’s Milan Fashion Week. 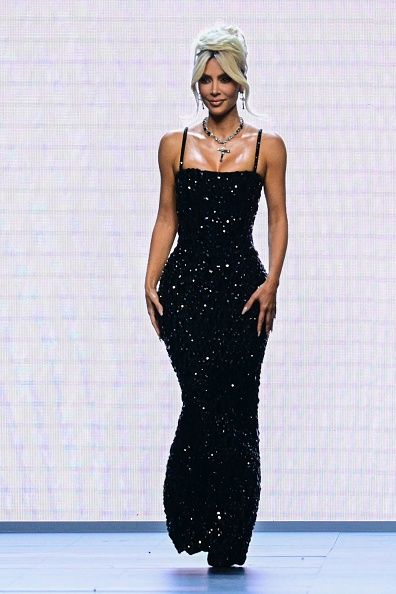 Early in 2022, Kim Kardashian surprised fans and the fashion industry by being the face of the world-famous fashion brand Balenciaga. Now Kim is no stranger to wearing fashion items straight off the runway. However, she has never been the face of a label especially because she isn’t a professional model. But then again many recognize that she has a great influence on the fashion industry. Once her Balenciaga partnership has ended, many figured that that would be her last major fashion collaboration. But that’s where you are wrong. During the 2022 Milan fashion week, Kim released her Dolce & Gabbana collaboration.

On September 21, 2022, the reality star took to her Instagram to post the campaign video she and the Dolce & Gabbana team had word on. In what was a series of videos, Kim could be seen wearing a few items from the Dolce & Gabbana 2023 spring collection. For their 2023 spring collection, Dolce & Gabbana took on inspiration from the 90s. This collaboration seemingly worked out perfectly seeing that Kim Kardashian showed that she could pull off a 90s look when she wore Marilyn Monroe’s iconic “Happy Birthday Mr. President” dress to the 2022 Met Gala. Now that fashion week has come to a close, it is safe to say that this collaboration was a smash hit.