In a stunning Fuchsia dress made by Pierpaolo Piccioli’s Anatomy Of Couture collection for Spring/Summer 2022, the rising movie star, Ariana DeBose, was awarded the movie honor as a supporting actress for her amazing role as Anita in “West Side Story,” a movie directed by Steven Spielberg. 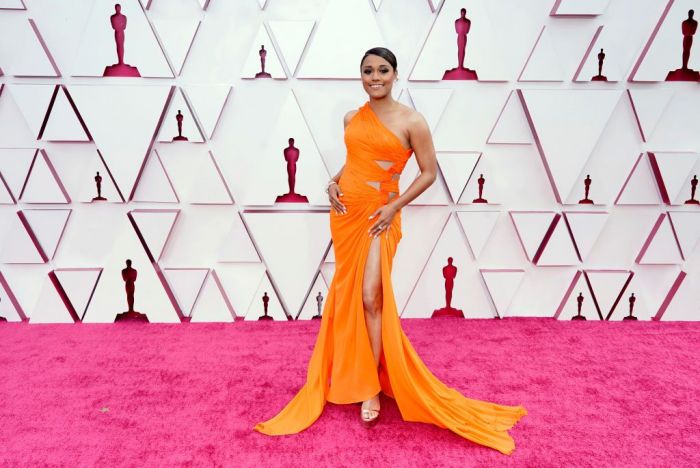 The 31-year-old actress and singer were shocked when she received the award from Selena Gomez and Martin Short. In her moving speech, She spoke about her roots in the dance world and how time-consuming it was to think of herself as an actress. She won the award over her fellow nominees Caitríona Balfe, Kirsten Dunst, and Ruth Negga. Not only that, but Debose also won her very first Oscar nomination for an amazingly well-performed role in the same movie. She ended her speech by saying, “I’ve watched so many of you for a very long time. You have inspired me and you continue to do so and I am just thrilled to be among you, so thank you.”

Ariana began her career at the age of 18 in the popular ‘So You Think You Can Dance’ program. She went on to become one of the top 20 only to be eliminated shortly after. Ariana considered failure a motivation to go on and try something new. Having experience with musicals in high school, and the fact that she was so fond of them, led her to give theatre a try in New York. Ariana is expected to be seen more after West Side Story. She will be appearing in the space thriller I.S.S. with many famous actors such as Sam Rockwell, Bryce Dallas Howard, Bryan Cranston, John Cena, and Samuel L. Jackson. At the moment, the project’s official release date is still to be announced.