Van Gogh announced the new acceptance of mood, expression, symbolism, and passion in contemporary painting when he produced this depiction of the night sky, which is dominated by the brilliant moon at right and Venus at center left. The Starry Night (created in mid-June) is both an exercise in observation and a clear departure from it. It was inspired by the view from the artist’s window at the Saint-Paul-de-Mausole asylum in Saint-Rémy, southern France, where the artist spent twelve months in 1889–1890 looking for relief from his mental illnesses. 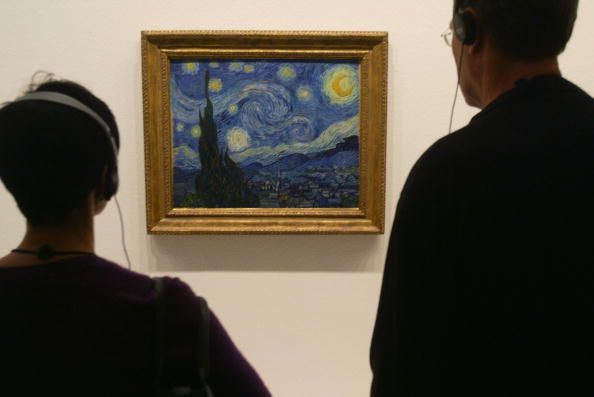 Although the painting, one of hundreds van Gogh produced that year, was completed in multiple sessions during the day under quite variable meteorological circumstances, the vision occurred at night. He couldn’t see the charming hamlet tucked among the hills from his window, and the tree to the left seemed much closer than it actually was. Additionally, the artist changed celestial outlines and provided a sense of light, even if some aspects of the sky have been recreated as they were viewed.

Night and nature were given an emotional language by Van Gogh that was far different from how they actually appeared. The Starry Night also demonstrates how inseparable van Gogh’s vision was from the new painting techniques he had developed. In this work, color and paint both describe a world outside the artwork and simultaneously telegraph their own status as, merely, cooler and paint. It is dominated by vivid blues and yellows that are applied with gestural verve and immediacy. Van Gogh’s use of simplistic shapes, thick impasto, and starkly contrasted colors, together with his rich blending of imagination, recall, and observation, may be part of what makes the work so captivating to later viewers and other artists. Van Gogh’s nightscapes were created with the intention of inspiring and motivating people.