Perhaps the most celebrated Mexican artist of all time, Frida Kahlo is best known for her self-portraits. Throughout her artistic career, Kahlo did not forego her indigenous Mexican roots. Instead, she paid special attention to the contemporary and indigenous Mexican culture, making her paintings a means of displaying the country’s art and culture to the world. While the artist may have drawn countless sketches, 200 of them are known to us currently. The common theme in all of them was life experiences, through which she illustrated her physical and emotional pain. 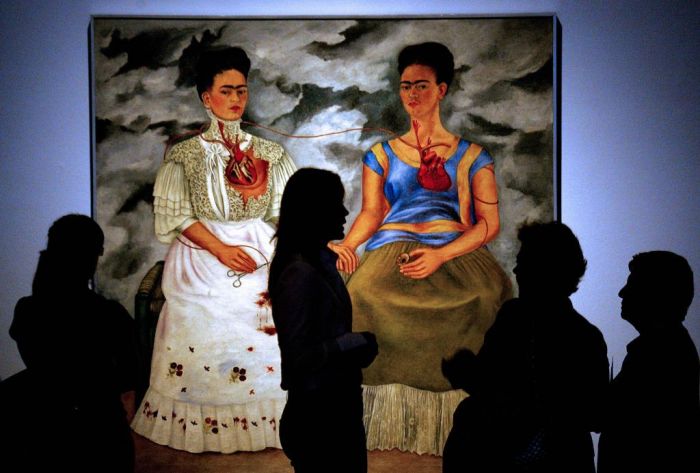 The artist lived a tough life. She had a total of 30 surgeries during her lifetime. As a child, she suffered from polio, and as a teenager, she nearly died in a bus accident. While recovering from the multiple fractures she suffered in the accident, she spent most of her time painting. Her injuries from the accident are illustrated in the painting titled “The Broken Column.” This painting is a self-portrait of the artist, where she is split down in the middle, and her spine is shown as a broken decorative column, while her skin is covered in nails.

Frida Kahlo was married to Diego Rivera, who too was an artist. Their relationship suffered many lows, adding to the difficulties of the artist’s life. Throughout her life, art was a form of escape, which she indulged in immensely. Among her paintings, most were self-portraits. The first known one was titled, “Self Portrait in a Velvet Dress.” The style of this painting was influenced by European Renaissance masters. Other famous paintings included “Portrait of a Woman in White,” “Self Portrait Dedicated to Leon Trotsky,” “Self Portrait- Time Flies,” in addition to many more. Today, there is a museum dedicated to the artist in Mexico City, known as the Frida Kahlo Museum, where all her paintings and belongings are kept.