La Tomatina. Ahh, what a wonderful phrase. Is there anything more lovely than a bunch of random strangers getting together at the heart of the city in order to throw copious amounts f tomatoes at each other? It was once said: Make love, not war. But what if that war is a tomato war? We’re pretty sure we should make war in that case. And yet, the question remains: what exactly is La Tomatina? Sure it includes tomatoes, that much we know for certain, but what lies at the heart of the red festival? 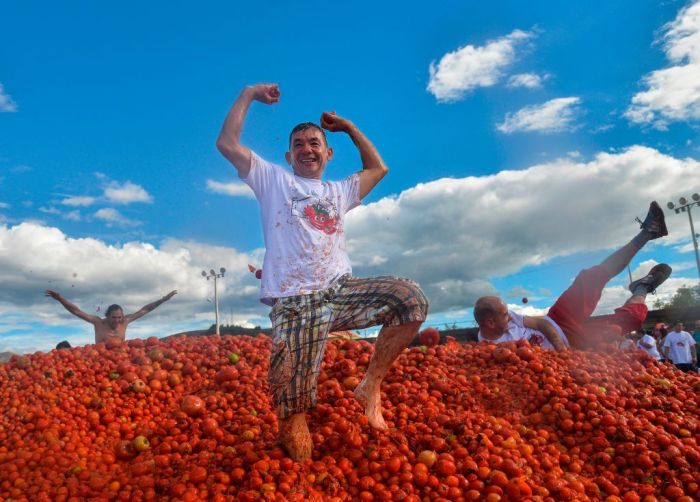 According to Wikipedia, La Tomatina is a festival that is held in the Valencian (meaning the part of Spain that is autonomously governed) city of Bunol, which is located in the East of Spain, approximately 19 miles from the mediterranean sea. Throughout the festival, participants get involved in tomato fights purely for entertainment purposes. The festival has its roots in 1945, on the last Wednesday of August when a bunch of young people began to mingle with a local parade that was going on, which quickly turned into a full-blown fight. In a fit of rage, people took to the streets and utilized whatever they could find in order to hurl at their adversaries, and what they could find were many vegetable stalls. People began to pelt each other with tomatoes until local law enforcement put the angry masses to rest.

The following year, the young residents of the city engaged in a pre-planned quarrel, bringing their own tomatoes from home. And although the local forces broke it up, the yearly tradition of engaging in full-blown tomato warfare was already set in place. The tradition lives on to this day, despite being banned in the 1950s. Apparently, not even the cold harshness of the law could prevent the passionate throwing of tomatoes.